The week before last I had a fainting episode, I had no clue I had passed out. A friend of mine came over to check on me when I did not answer my phone, for a dr appointment I was supposed to go to that day. I was not responsive and I had no clue I had fainted or how long I was out for, I do not even know what I was doing before it happened. I had gone to the er by ems, and the er dr could not figure out what caused me to faint.  I am now in the process of trying to find out what caused it to happen. This is not the first time I have fainted it happened quite a few times but the first time was before I was diagnosed with Gastroparesis and was much younger.  I had some blood work and CT scan of my head at the ER that came back clear.
My primary had done an echocardiogram that came back normal and some blood work finger stick again all normal. He also did Orthostatics for my blood pressure to see if that was the cause but that came back normal. Saturday till part of today I had to wear a halter monitor for 24 hours. I had had a 24 hr. halter monitor test done before years ago for a different reason, but it amazing how much smaller the halter monitors have gotten since then. I was actually surprised my primary had the halter monitors in his office and did not have to be sent to a cardiologist to have it done like I did when they did it years ago.
I go back to my primary tomorrow and see what the plan from their is. He is trying to do his best to find out the cause of this, because he knows this has me concerned and this recent episode scared me  and also that it not really an isolated incidence and that it happened more then once so knows something most likely has to be causing it. He also knows it scared me and that I would like to be able to find out what causing it. So we can try to deal with it, especially because I have no warning before it happens it just happens so I have no time to try to prevent it from happening or be able to do anything about it and I don't know it happened until after I've come to and don't know how long I am out for each time it happens. so I am hoping we will have an answer soon to what is causing it and can find out how to treat it or prevent it from happening. 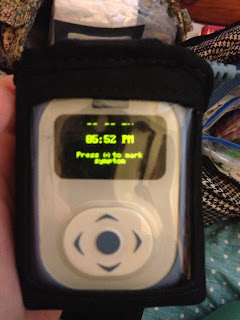